Lake Superior State University, (colloquially referred to as Lake State, Lake Superior State and LSSU) is a small public university in Sault Ste. Marie, Michigan. It is Michigan's smallest public university with an enrollment around 3,000 students. Due to its proximity to the border, notably the twin city of Sault Ste. Marie, Ontario, LSSU has many Canadianstudents and maintains a close relationship with its international neighbor. In a sign of its unique situation, LSSU has both the Canadian and United States flags on its campus, and both Canadian and American national anthems are sung at athletic events.

Lake Superior State University offers primarily bachelor's and associate's degrees, but also grants a master of arts in curriculum and instruction and many certificates. The university also offers joint programs withSault College and Algoma University in Sault Ste. Marie, Ontario. LSSU also has regional centers located in northern Michigan in the cities of Gaylord, Escanaba, and Petoskey. Recently a center opened in southeast Michigan in the city of Dearborn. It is one of three Michigan public universities that function as both a university and acommunity college.[8]

Lake Superior State University was established in 1946 to address the needs of returning World War II veterans and to provide educational opportunities to the people of the Eastern Upper Peninsula. The 115-acre (0.47 km2) campus includes several buildings which are listed in the National Register of Historic Places.

Much of the university's upbringings can be credited to Michigan College of Mining & Technology, which is now known as Michigan Technological University. The mining and technology college opened the Sault Ste. Marie Residence Center of the Michigan College of Mining & Technology, which was commonly shortened to Soo Tech. The original class consisted of 272 students. The institution was later renamed Lake Superior State College of Michigan Technological University in 1966. The college received autonomy from Michigan Tech. in 1970 and was known as Lake Superior State Collegeuntil 1987, when the institution was granted university status.[9]

Lake Superior State University was the first college in the United States to offer an accredited four-year fire science program, and continues to be one of only three universities to offer such a program.

The institution is also one of only three universities in the United States to offer the robotics specialization in the ABET/TAC accredited manufacturing engineering technology, electrical engineering, computer engineering, and mechanical engineering bachelor of science degrees. LSSU is home to one of the best robotics educational facilities in North America. The robotics laboratory is valued at over $3 million.

The university's college radio station is WLSO, and its student newspaper is The Compass.

In 2010, LSSU launched its Creative Writing program, which focuses on poetry, prose, and performance writing. This program augments the twin Saults' strong artistic communities. The program's "Visiting Writer Series" brings accomplished writers to the campus to read their work and hold master classes with students and aspiring area writers. An international literary journal called Border Crossing was founded by Creative Writing faculty members at LSSU to showcase poems, short stories and essays. The journal's title references the International Border between the United States and Canada, near where LSSU sits. The English Club also produces a student literary journal called Snowdrifts.

Aquatic Research Laboratory The LSSU ARL[14] is an off campus research and educational facility located in the east end of the Cloverland Electric Coop hydroelectric plant. The ARL houses the University's fish hatchery, and conducts research on fisheries and aquatic ecology in the region. Since 1984 the Aquatic Research Laboratory has released 40,000 Atlantic salmon into the St.Mary's River. Environmental Analysis Lab The EAL is housed in the chemistry department at LSSU, and provides analytical services[15] to LSSU researchers, government agencies, businesses, and private citizens. The EAL routinely conducts standard environmental testing, as well as trace level analysis of environmental contaminants such as pesticides, persistent organic pollutants, metals, and cyanotoxins. Revenues from the EAL assist the Chemistry Department in purchasing and maintaining state of the art analytical instrumentation, and provide students with employment opportunities and experience working in a professional lab. Product Development Center The PDC[16] provides a mechanism by which small businesses and entrepreneurs can access the expertise of the LSSU engineering faculty and students to produce low cost, functional prototypes. The PDC provides a range of services including rapid prototyping, component design and testing, machining, process optimization, statistical analysis, and documentation services. Robotics Lab The LSSU Robotics Lab[17] is a multi-million dollar facility dedicated to student instruction in robotics and automation technology. Robotic workcells use Fanuc, Stäubli and Motoman industrial robots. Simulation Center The LSSU School of Nursing recently opened a simulation center in the Sault SmartZone building. The “family” of high fidelity, computer-controlled, wireless mannequins allows students and healthcare workers to practice their skills on the equipment that responds to their care just as human patients would.

Lake Superior State University has a variety of traditions.

The school's official nickname is the Lakers, but in some instances the university's athletic teams are called the Soo Lakers in reference to the school's hometown. Prior to becoming known as the Lakers, sports teams were known as the Hornets. The most prominent sport at LSSU is men's ice hockey, which is the school's only NCAA Division I program. The men's ice hockey team is a member of the Western Collegiate Hockey Association. Other sports at LSSU play at a Division II level in the Great Lakes Intercollegiate Athletic Conference, of which LSSU is a charter member.[24]

The Lakers have appeared in 10 NCAA Division I ice hockey tournaments and won three national championships (1988, 1992 and 1994) at that level. LSSU also won two men's NAIA national championships in 1972 and 1974 while playing in that association. The Lakers have taken the CCHA regular season title four times (1974, 1988, 1991 and 1996) and have also won the CCHA conference tournament four times (1991, 1992, 1993 and 1995). Many of these teams' players have gone on to play professionally in the NHL and other professional leagues. LSSU also has a Division III club hockey team, which plays in the American Collegiate Hockey Association.The Taffy Abel Arena where the Lakers' play is named after Clearance "Taffy" Abel. It is named after him because when the University got the donation to renovate the arena from the Sault Tribe of Chippewa Indians, it was in the contract that they would get to name the arena. They chose Taffy Abel because he is from Sault Ste. Marie, Mich., a legendary hockey star, and a Native American.

LSSU is home to a cross country and track & field program. This year, LSSU looks to come back strong with a great season.

LSSU briefly fielded a football team from 1948 to 1950 when the university was known as Soo Tech. This team went by the name of the "Hornets" and they were undefeated for two seasons. The hornets played big Michigan teams such as the University of Michigan and Michigan State University. Due to funding, however, the team was cut in 1950.[27]

LSSU also briefly fielded a club men's rugby team, 'The Black Sheep', from 2006 to 2009. Despite enthusiasm among students, the team folded due to lack of support from the administration. 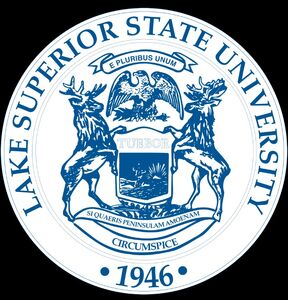 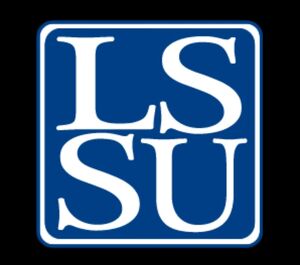